Busy days but not much interesting going on. Computer crashed, enjoyed the last (long) weekend of summer and got drunk Saturday night. Not much to write about.

Guess its time to start digging into some old insights about the human condition.  On today’s menu is The Spectrum of Indubitability. This particular gem of our quantum kitchen discussions was a result of the ongoing debate on the merits of the global warming scene. My argument that the term “consensus” used too loosely when compared with the consensus regarding other scientific theories such as quantum mechanics, evolution, relativity and Newtonian mechanics led to Thorn plotting various theories and psudo-theories on a graph he aptly named The Spectrum of Indubitability. 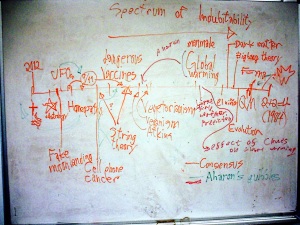 Note that The Wiki Religion was placed between quantum mechanics and 2+2=4.

2 thoughts on “The Spectrum of Indubitability”